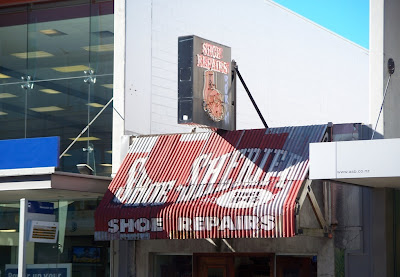 We played ‘mafia’ at youth group Saturday. I don’t think I’ve ever been the sheriff.

Speaking of sheriffs, Di and I drove past ‘The Shoe Sheriff‘ in Newmarket, Auckland, today.Â  It’s a long-standing shoe repair place.Â  I used to work ((and drink copious amounts of coffee)) in the Newmarket area, and I still remember when the big, bad, black hole of a shopping company, two-double-seven was expanding across Broadway street, buying-up-and-tearing-down the old less-than-cared-for buildings that were there, and replacing them with flash, glistening new buildings ((which will, of course, in a matter of time, be old and less-than-cared-for themselves – and such are the days of our lives)).

But ‘The Shoe Sheriff’ would not be bought.

When it was happening, I went in and gave the owner a hearty kiwi “good on ya, mate”, and we talked about the stark contrast between the rapid installation of shoe stores ((hint: not used shoes)), and the repairing of good-enough shoes that the Sheriff does.

A stark interruption in a line of expansionist architecture, this small, tin-roofed, neon-signed, shoe repair shop is a veritable icon of all that is restorative, salvific, restorative, just, holy, pure, right, wholesome, fair trade, organic, green, seventy-ish, eco-friendly and cool about the world.

No doubt, the board/owners of two-double-seven probably feel it’s just a matter of time before they can fill in this small bastion of light with another shiny conglomeration of glass and concrete.Â  I say, “Long live the Shoe Sheriff!”

If you live in Auckland, and ever head past Newmarket, and have shoes that are ‘good enough’ to be repaired, do call in to the Sheriff, won’t ya?

The word ‘teleology’ (from Greek Ï„ÎµÎ»Î¿Ï‚ ‘telos’ – meaning ‘goal’, ‘end’, ‘purpose’ or ‘that toward which things tend’) is not a street-level term.Â  However, the concept of a purpose, goal, function or ‘end’ to things most certainly is.Â  It’s a common as anything.Â  Teleology is blindingly relevant.

END_OF_DOCUMENT_TOKEN_TO_BE_REPLACED

Visit and fill out name/email and the site will send an automatic email on your behalf to progressive grocers – requesting that they stock fair trade bananas.

Now, you’ll also probably get an automatic reply from progressive about their ‘efforts’ – which includes a ‘voluntary code of conduct’, which (found here) initially looks/sounds nice.

However, upon a closer look, it seems like the usual coporate-ish reaction to such things.

“Oh, but we are already making every effort to be good, fair, better, nice traders.Â  No, really.Â  We’re not just trying to make money and be ‘progressive’… Look at our fancy code-of-conduct website!Â  It’s a whole 2 years old!Â  That’s how long our tradition is of caring about ethical business!Â  All the farmers/producers (in other countries!?) have to do is pay $50, fill out a complicated form, pay travel expenses for a ‘Ombudsman Representative’ to meet with you (no lawyers, sorry), and cut through probably about 16-thousand other pieces of red-tape…” et cetera, ad infinitum…

http://www.produceandgrocerycode.com.au/accessmediation.htm (And I quote: “Applying to the Produce and Grocery Industry Ombudsman for mediation is simple.” emphasis mine.Â  Really!!??)

http://www.produceandgroceryombudsman.com.au/process.html (More quotes: “Once the Ombudsmanâ€™s Representative has been appointment, he or she will ask for any travel expenses to be paid in advance and will ask you to sign an appointment agreement which makes your meeting confidential between everyone there.” and on meeting the the ombudsman: “You must make sure that you have authority to make a final agreement without checking with anyone else. If someone else has the final word then that person must attend too. Lawyers are not allowed to attend but you can bring a support person. That person is not an advocate, just someone there to support you.
” Gee… thanks!)

Friggin’ hilarious…Â  and a bit true as well :)

END_OF_DOCUMENT_TOKEN_TO_BE_REPLACED

My wife and I were purchasing shoes at Hannah’s today (don’t ask), and felt empathy for the mother-of-teenaged-daughter, whom we overheard saying, “It’s school, not a fashion show…”

Among the many things no doubt blurring the distinction between the two would be Hannah’s latest catch phrase: “Life is your catwalk.”

Prof. John Stackhouse’s post (here) on the recent “bus campaigns” is quite good and balanced I think.

Apparently, the board of a Vancouver bus company has the following regulation on bus ads:

â€œNo advertisement will be accepted which promotes or opposes a specific theology or religious ethic, point of view, policy or action.â€

END_OF_DOCUMENT_TOKEN_TO_BE_REPLACED

Recent US stimulus package = nearly a trillion US dollars.

10% of 10 million US millionaires’ funds = a trillion US dollars.

Oh my gosh, have we accidentally through the magic of math discovered how to stimulate the entire economy without increasing the debt to the tax payer? A one time flat tax, ooops I mean millionaire stimulus to invest in America, the wealthiest are known to spend the least hence lets re-allocate that money where it mattersâ€¦

lol – now that is a joke, American millionaires investing in America.

((note: the comment below this one links to an article saying there are only 3 million millionaires in the US – but it’s still an interesting thought!))

Anyone who has a knee jerk (i.e. less than critical) reaction to political events in general and the recent U.S. stimulus package in particular, should shut up and think before ranting.

That said, I just don’t like the thought (much less the passing) of the new stimulus package (and I’m not at all anti-Obama – to be crystal clear).Â  $US838 BILLION – on what I can’t help but see as a kind of massively over-sized whallop to a horse that is eventually going to die.Â  Yes, I’m aware of the complexity to all this, and No, I don’t think there are any quick fixes.Â  But I still cannot understand or begin to support spending nearly a trillion dollars on trying to preserve the “American Way of Life” â„¢.

What kind of precedent are we setting for future generations?Â  What are we saying to the rest of the world – much of which is living in some mild or severe form of poverty; a different kind of poverty indeed to the ‘poverty’ some are facing in ‘developed’ nations around the world.

Some may think, “Oh, but financial prosperity for the ‘rich west’ will enable them to be generous to the ‘poor rest’…”Â  That kind of capitalistic mentality (a.k.a. ‘the rising tide will lift many small boats’) is utter Bull.Â  Greed does not engender generosity.

Instead of our bank account levels needing to go ‘up’, we need our standard of living to go ‘down’ to a realistic and sustainable place.Â  And as long as ‘going out and spending money to stimulate the economy’ is part of doing your ‘patriotic duty’, then I think I want to be unpatriotic.

I’d absolutely love (or maybe hate?Â  or both?) to know how much the huge (several ‘windows’ wide and several stories high) ads for shortland street (which I saw today in Auckland city-centre) cost to make, install, display and dispose-of…Â  It’s a freekin’ TV show…

Obamas turn has come to rule the American empire.

Will it continue to be a mass-consuming empire of greed?

Only time will tell.

Here is a thoughtful, timely and read-worthy critique by Brian Walsh entitled:

And yes, the same question could’ve/should’ve been asked had McCain won the election…